Road Rash: What Happens When You Plan

I had a plan for the day, for the week actually. I was going to get shit done. I was going to write, I was going to clean my house and plan some meals and get some groceries so I could actually cook for my kids. Hell, I was even going to build a deck.

And then my plans went down the toilet.

For starters, I managed to lose a week. You know that last line of the calendar when the month runs out in the middle of the week or so and you have to turn the page to the next month to complete it? Well, I, instead of turning the page, simply wrote my to-dos in the empty boxes, which made me think I still had this weekend left in May before I had to flip over to June.

This weekend is June. Which means, the shit I had to do next weekend, is now shit that has to be done in 3 days. There goes my deck. There goes the epic party I was going to throw for a friend, of which the invites have already been sent and to which I have said (at the requests of, “what can I do?”), “It’s all good. I’ve got this under control. I’m going to be organized this time around!”

Now I’m frantically trying to figure out what the hell I’m going to do and how to pull it together. I can tell you one place we won’t be sipping mimosas: on the deck. Because I sure as fuck do not have time to build one.

Not only that, I realized my son’s next motocross race is now this weekend instead of next weekend. Which means, only a few days of respite from the terror and stress of watching him race instead of a week and a half. (Which is, of course, a whole other post that will come soon, but in the meantime, check out this one, it is still completely relevant to trying not to cry the moment that damn kid gets on a bike).

Well, I can handle it. I can do this. Yes, life kinda threw a wrench at me and hit me alonside the my head, but I’d take an advil and deal.

Enter my plan for the day.

Yes, I’m stressed out that I’ve lost a week. Yes, I’m wishing I was more like my mother who has her shit together and writes things down and plans in advance and prepares ahead of time so she doesn’t have to feel like a complete failure every time she wakes up. But I was going to do this. I’d get my shit together starting….this morning. I got up, meditated, wrote, queried, wrote, checked my email and filed away my new rejection of the day (because that is how they seem to be coming now…every day, without fail), and got everything squared away for the upcoming party so that I could take my son to the dirt bike track and actually get out of the house and enjoy the sun today while feeling more confident about him racing this weekend because he’d been able to practice (big breath after that long sentence). After that, I was going to go for a walk, maybe do a little more writing, and plan out the rest of this party (shower. What the hell am I talking about, it’s a shower. Those aren’t parties, not really. Although, maybe I could go more for that route and it wouldn’t seem so uppity and stressful).

Anyways, things were going as planned, actually, they were going better than planned because my most recent order from amazon was delivered entirely unexpectedly (in that, I technically live out of town so they’re not supposed to deliver to me, so when they do, it’s a special treat) in which there was a book I’d ordered that I’d completely forgotten about but which looked super sweet and that I couldn’t wait to read. So, not only was I going to be able to sit outside and enjoy the sunshine while my son did what he loved, I could read a killer book at the same time. This called for a coffee to go with it.

So, fast-forward (does that even exist anymore? Or is that one of those obsolete things that went out with tapes and rabbit ears on your tv?) to picking up Starbucks before dropping my daughter off at the pool, and then pulling into the track.I had no problem loading and unloading his bikes into the back of the Diablo (oh, the Diablo. Yes, what is sweeter than dirt bikes in the back of a brown, 1980, el camino-twin half truck half car?). The track was empty. It was just me and my book, and Miles and his bike. I finally felt like things were going to work out (because yes, they haven’t been feeling that way and you know when the little things work the big things feel like they’ll just fall into place?). Things were going to be alright. Even when his boot broke, the two of us were able to fix it and he went back to riding. I went and got my book, walked over to the bleachers to watch him make his rounds, and sat.

Then I thought to myself, “I should probably go stop Miles at the end of this lap so we can double check his boot before he goes again.”

I got off the bleachers to walk to the other side of the track, which meant, turning my back on my kid as he rode.

I only made it about five steps when the sound of his bike disappeared. A few seconds later, that horrible sound came: Miles screaming for me, screaming, “It hurts, oh god it hurts! Mom!”

I go running. As I have a hill to climb and track to traverse, he keeps screaming for me to come and I yell back, “I’m coming, I’m coming, are you okay?”

He doesn’t know. That’s the worst part. He can’t answer me, he’s only screaming and writhing on the dirt track. His bike is on its side, leaking fluid, his handlebars are messed up and the grips are wrecked, which means he hit hard, and he can’t get up.

On first glance, I see no pool of blood. Good. But then I have to do something I never want to do again but know I will: I go searching for blood.

I get him to help me take off his protective gear (yes, he wears protective gear. I may be a complete disaster and fuck up on a daily basis, but my kid does not ride without his safety gear. I at least have that much under control) and I tentatively lift up his shirt to find….road rash.

Thank god. No gashes or holes or tears or, gasp, protruding bones.

I scan his torso. The bruising is low enough that I don’t think he’s broken any ribs. He can’t move his arm but neither does he jump when I touch it, which means, I don’t think he’s broken that either. His helmet does not have any major gashes, so I don’t think he has a concussion, but, you never know, he is still refusing to get up. Or, he can’t because hurts too much. I take his face in my hands and try to calm him down, breathing with him, which also helps to calm me down. Then I scan the track and pick up the pieces of gear we took off, pick up his bike and roll it out of the way, and find broken pieces of gear lying alongside it. He hit pretty damn hard and that track is more like concrete than soft dirt.

So we go to emergency.

Long story short, he’ll be okay. Something I’d figured out because he was chattering away in the waiting room and reading his book and basically not acting like he’d just knocked the shit out of himself.

Well, my thoughts and love-hate relationship with motocross will come in another post. But my well-planned day sure took a dive. 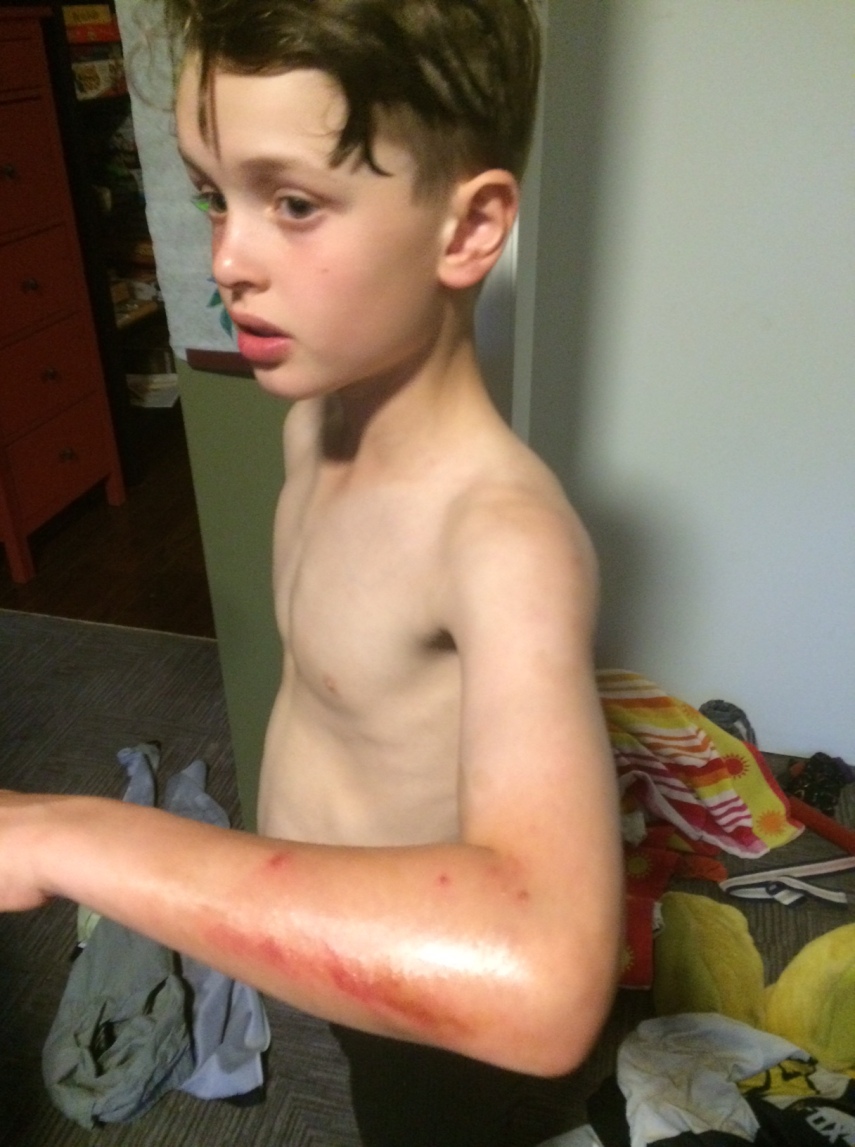 I should have known better than to try and plan it out. And I don’t mean that in a bitter, frustrated sense. I really mean that.

You can’t plan. Not really. Sure, you can say to yourself, “I’m gonna do this, and then maybe this.” But you cannot, for one moment, decide what the outcome of that will be. There are too many possible outcomes of anything we choose to do. We may think we’ll take our kid to the track and all will be well, but then the conditions will suck, or a new jump will be added and throw him off – literally.

Or, we may think we’re gonna write a book and send it away and the agents will fight for it and the publishers will come knocking and the fans will be screaming at your door, but in reality, we end up with, “I’m sorry, this just isn’t for me,” or, “This isn’t my kind of project,” or, “I just can’t get behind this.”

You think you have weeks to plan the most amazing bridal shower for someone you care about only to realize it’s in three days because you’ve been so busy trying to make your life run smoothly that it jumped up and bit you in the ass, yelling, “You can’t plan this shit! It’s not going to end up how you imagined it in your head! Life happens and it will turn out how it fucking well wants to.” And then you’re sitting in an emergency room with your kid thinking, okay, well, he’s okay, and that’s really all that matters.

And you realize, you’ll be okay too. We all will. Even if we get sidetracked and sidelined and rejected and tripped up and fly sideways off a jump and go skidding across some really hard dirt whose only purpose is to kick our asses and tear away layers of skin. If we never tried to make the jump, we’d never know the joys of actually landing it. And what fun is there in a flat track? Anyone can ride that. It takes guts to face the turns and the jumps and the step ups and the steep declines and we can’t plan exactly how we’re going to land or which line we’ll end up in when we do. But we have to keep trying, and work with the conditions before us instead of trying to force it into something it isn’t. And hell, even if it doesn’t end up how we planned, if we work with what we’ve got we can still end up with a killer story, or a bad-assed bruise, or at the very least, some delicious mimosas that will make it a lot easier to let go of what didn’t work out and enjoy what did.

Categories: Life in General, Our Current Reality, Parenting, The Road to Self Discovery, The Writer's Life, Uncategorized