The Road Less Traveled Can Be a Bitch

Writing. (Or if you are an artist, a creative of any kind, go ahead and input whatever it is you’re trying to make into a career: painting, acting, crafting, drafting, scrapbooking. I’m sure you can relate.)

If you have a career, I guess.

If you don’t, well, it’s even harder because you don’t have the reward of a career to make things a little less depressing.

If you don’t have some seed of the potential for a career, you could be stuck in the perpetual hell that is the struggle to actually be a writer. Like me.

Wake up. Now, some of you writers might have already been up for hours getting your daily word count in before you go to your day job or your kids wake up and distract you and all that. Good for you! That is a goal of mine. It’s a goal I make every single night before I go to sleep. But then I do two things: I start reading a book that I can’t put down, or, I start watching a show that I can’t stop streaming. In what feels like minutes but is actually hours, it’s way past my bedtime and my early wake up intentions morph into repeated pressing of the snooze button until I’m way too late for anything.

Once I’ve given up on the snooze button, or my bladder is so full I have no choice but to drag myself to the bathroom, I drag myself up. Full of promise. It is another day after all. Another day of potential, of chances, of the building of a highly successful and lucrative career.

Yes, I’m usually still in the final phases of a dream. Don’t worry, reality will hit soon enough. Usually before the pee hits the toilet water.

As I’ve queried about 20 agents, and only been rejected by 6 so far, the first thing I do once I can focus is check my email to see if any of them have replied.

Unless it’s to say thanks, but no thanks. So, in my case, no news probably is good news. There’s hope in no news. Waiting does carry some promise of a manuscript request even if it does tend to take all the positivity you have left to keep on hoping as the inbox continually fills with ads and bills and spam.

Because I’ve learned that in order to have a hope in hell of getting noticed by said agents, you must have a platform, I move onto that. I go to my other social media sites to see if there’s any good news there…new followers, new likes, just, well, anything.

And, you realize, there is some good news. One of your forty followers liked your post, so that’s a start. And, hey! Is that a new follower? Whoo hoo! One new follower!

One is better than nothing, for sure. And trust me, I know. I’ve had none. I’ve sent my blog into the ethers of the internet and gotten nothing back. Many, many times.

Now, it’s not that big of a deal on Twitter when your stuff usually only took a moment or two to write, but it gets pretty depressing when it’s a blog that took hours of your day and any hope of building a tribe rests on that said blog post and those nonexistent followers. Especially when so many other blogs are being shared that are just like yours but obviously more worthy of sharing. Because you’re the nobody just playing at it and the other post was written by someone with followers that range in the tens of thousands, maybe even hundreds. They must know what they’re talking about. They are far more liked than you.

And then, because you obviously haven’t depressed yourself enough in the time you’ve been away, you go on Twitter and see your tweet, all alone; no likes, no retweets, nothing. Unloved. While scrolling past dozens of beloved tweets and retweets, the little icon below their words lit up with love. You know, the ones that have upwards of 1500 hearts under it and another 975 retweets.

1500 people loved the fact that some important person is having beers at a bar, while your best material sits unloved, unnoticed and unliked because you’re lucky to have 75 followers when others have 75,000.

Before checking your other dismal stats you then go back to your email, just in case an agent did happen to read your stuff and did happen to actually read it and actually like it. Because he did say he wanted to read it when you pitched it to him at the last conference. He couldn’t have been lying, right? He’s bound to reply to you any day now…

So then you go on other blogs to see what you’re doing wrong or what you could do better. You read them and sift your way to something inspiring and positive, something that will make all this pain worthwhile. Something to let you know it will get better and this work is worth it.

And you read stuff like, “Back when I had 5,000 followers,” *(you mean, 5,000 is the worst you could do?) or, “Before I was picked up by my agent,” (after two rejections instead of the standard 100) or my favorite, “Without my community of fellow bloggers and writers.”

Fellow bloggers and writers? I’ve had a hard enough time finding followers and readers, have only had about 5 comments in all 115 of my blog posts, so obviously there aren’t any “fellow writers and bloggers,” around me! So now, not only do I have to get readers and followers, I need to find friends too????

And then it came to me. I’m trapped in high school hell once again. That’s why I’m so goddamn miserable. I’m watching that popular girl who makes all the girls and boys drool, walk down the hall, laughing and going on about all the fun she had at the parties she went to over the weekend while I was at home reading a book, her cluster of followers hurrying after her, copying her every move, while I’m shoved back into my locker because I’m in the way.

School was something I had to survive, not because I was being bullied (although, that did happen too), but because I just never felt like I was good enough. I didn’t have the right clothes, I had good marks but never the best marks, I was always just a little bit bigger than everyone else, and a little bit frumpier than all the popular girls. I was never invited to parties. I was never asked to sneak out of class and go drink beer in the parking lot (not going to say that was necessarily a bad thing to be left out of). I certainly was not the girl everyone emanated and I’ve spent the past fifteen years (I hope it’s only been fifteen years, but I’m pretty sure that’s rounded down) trying to overcome never feeling good enough. It’s taken me this long to feel like I’m okay as who I am. I don’t need to be popular. I don’t need to be invited to parties or talked to at parties to feel okay. I’m okay just as I am.

Except now I have to throw myself back into that popularity contest. And once again, I’m failing miserably at it. Which hurts. And sucks. And I’m pretty sure my face is going to resemble the pizza I ate for dinner because I was too depressed to cook and because my hormones are all over the place just like they were when I went through this twenty years ago!

And it’s really hard having the pretty girl tell me it’s going to be okay, because that pretty girl has had an agent actually sign her, and that girl has over 100,000 followers, and everyone sits up and takes notice when she tweets, while I sit off in the corner, getting hit by the door to the bathroom because no one even knows I’m there.

I have to believe this will turn out. I have to believe that this post, this temper tantrum/pity party I’m having right now will be something I will look back on and laugh about with my community of writers and bloggers when I’m rolling in followers and readers, my novels lining my shelf behind me. Because that’s what everyone tells me is going to happen as long as I don’t give up . And I won’t give up. But I’m not going to pretend this isn’t hard and I’m not going to color these moments with positive quotes like, “Your no is just one step closer to yes!” Because it isn’t. It’s a big, fat, fucking No. Door closed. And it’s not about another one opening, it’s about running down a hall of locked doors, trying every single one, without any keys. 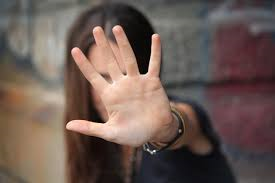 I’m the new kid that no one likes, or wants to talk to because they’ve got their own little groups and it’s easier to pretend I’m not there then try something new. And it really sucks. Being the one to stand by and watch while everyone else is picked up, to hear that your stuff is good but just not good enough, does not have a silver lining sometimes. And yes, all those published authors will tell you how many times they were rejected, but did they ever tell you, truly tell you, how unbelievably hard every single one of those rejections was?

Because sometimes, you don’t really care if that no will get you to the yes you need, not when you’re drowning in a sea of those NOs. And I think sometimes we forget that we don’t always have to be positive. Sometimes, the only way to get to anything remotely resembling success, is to sit and wallow in failure. Because I’ve heard, that many successful people got their big break when they were at their lowest. So I’m gonna stay low for a while and see what happens.

And for a while, I obviously mean until I wake up tomorrow morning again…full of hope…and promise…and potential….because tomorrow’s a new day, right?

Categories: Accepting Oneself, Life in General, Our Current Reality, The Road to Self Discovery, The Writer's Life