I have to swim in a swim meet next weekend and I am freaking out. Okay, wait a minute, let me rephrase that. I do not HAVE to do anything. I need to take ownership of this, of all that I do. Especially since, if you want me NOT to do something, all you have to do is try to force me to do it, make me think I have no say in the matter, and I will purposely NOT do it just to prove a point. Even if I want to do it, I won’t if you tell me I have to. It must be that rebellious streak no one beat out of me, the one that screams, “Don’t tell me what to do!”

So let me rephrase my opening: I have agreed to swim in a swim meet next weekend. My kids are signed up for it and as I am also part of the club and will only have to commit to the 50m freestyle and a relay, I have acquiesced to participate. Now, I must remind myself that I was the one who agreed to it; my coach did not threaten, persuade, cajole, pressure or guilt me into it. Basically, the conversation went like this:

Coach: Are you going to the meet next weekend?

Me: Yes. The kids are swimming, I’m not.

Coach: Not even if it’s just a 50m freestyle and a relay?

See? So, I don’t HAVE to swim. I have agreed to swim. Quite easily, as a matter of fact, which makes me wonder now why I am freaking out. Obviously I wanted to race.

Is it because I am going to have to get up a block in my bathing suit, at 35 years of age, alongside people half my age to swim in a race meant for children?

Is it because the blocks are really high and I am scared of heights, along with being scared of the inevitable belly flop from said height?

Is it because I am terrified of coming in last, making a fool of myself, getting a foot cramp, flubbing my flipturn, and generally coming across as an ass?

I am freaking out because I will have to spend the weekend at a pool, in public, without any make up on.

Now, for many of you, this is no big deal and you are probably sitting there thinking, “And she couldn’t sleep because of that? How superficial and pathetic is she?”

I will argue with you that I am not. Not superficial, at least (others may disagree, but hey, who cares about them, right? They don’t know me! Only I know me! Oh, wait, I haven’t gotten off track again…). However, this is a huge, huge issue for me. Even a bigger deal than parading in a bathing suit in front of hundreds of people (hundreds? I’m not sure if that many can fit, however, there are at least 60 people from our club going nevermind the other clubs, so, at the very least, 200 people?), known and unknown (something that was a bigger deal the first day of swimming until I just decided, screw it, I’m thirty-five, this is how I look, I might as well get over it and put on that damn swim suit. Added a sports bra to it helped a great deal. Now that I know there will be no unexpected runaways, I am okay with the bathing suit. Oh, but this isn’t about bathing suits, is it? Oops.). For some reason, this is probably the biggest hurdle of my adult life…or, of my life right now. Even my back pain, stomach issues, body dysmorphia, recurrent eating disorder, along with other day to day struggles, do not compare with showing my naked face to the world.

I’m sure many of you are reading this and shaking your head at me. But insert your own issue here. You may easily walk around without makeup but shudder at the thought of wearing a bathing suit in public, or of speaking in public, or, well, I don’t know, peeing in a public bathroom. We all have that massive hurdle that looms over our life. For me, it is the big, black circles under my eyes.

Thinking back, I’ve realized that I have used make up to cover up my insecurities since I was twelve-years-old. And basically, I didn’t realize I had insecurities until then. So, for over half my life and for the entire existence of my known insecurities, I have used make up to cover them up. When I was twelve I developed a horrible case of acne. None of the many, many, many acne face washes and creams had worked enough that I could look in the mirror without wanting to cry. So, I turned to make up. Make up (and eventually, accutane) was the only thing that enabled me to look in the mirror without hating myself. It was the only thing that made it possible to see beyond the pus-filled pores and allow others to do the same.

I may not struggle with acne like I used to, but I still struggle with looking in the mirror, at least, with a naked face. Now, my reflection in the mirror does not reflect the zits spackled across my forehead, nose, and chin, but it seems to highlight the black circles looming dark and large under my eyes. Some days they are so bad I swear people must think my husband beats me. Or they would, if I didn’t cover them up. And I do. Every. Single. Day.

The only time I’ve gone an entire day without makeup is when I’ve been so hung over I could not get myself upright tall enough and long enough to even see my reflection in the mirror. And thankfully, my face reflected in the toilet water just before I puked was never clear enough to see details, or I would not only have been beating myself up for being hung over, but for being hungover and looking like shit at the same time. Thankfully, that has not happened in a very, very long time.

Basically, in my overly wordy and digressive manner, what I’m trying to say is that I cannot face a day without make up and I haven’t really ever done so since I was twelve years old. Even if I am alone, and I am most of my days, I still need to cover my face with layers and layers of undereye concealer. I usually reapply it every few hours, thinking to myself, this has to stop. Sometime, eventually, I need to come to terms with this.

And so comes this weekend.

This weekend I can’t hide anymore. This weekend I not only have to face my own naked face, I have to show it to the rest of the world. And I am terrified.

I wish I was one of those people who could walk around with naked face all the time and not care. But then I look in the mirror and I want to cry. I want to scream at the gods, why me? Why do I have to be cursed with this?

And yeah, I know there are people out there with real problems. Problems that so drastically overshadow mine that I should really be ashamed to have already spent 1360 words on this issue, ashamed that it will take even more than that to finish this post. But that is it and this is me and I can’t un-feel the way I feel.

Or can I? Can I get over this and move beyond these dark circles?

Today ended up, inadvertently, as a preparation for the weekend. Why? Because I was worrying about this weekend this morning, wondering if I could buy waterproof makeup, when I had to go to the chiropractor. A chiropractor who worked on my sinuses to help with my migraines, work which resulted in his wiping away of most of the concealer I had strategically placed under my eyes. Concealer I did not have with me to reapply. And so, instead of running home to hide myself from the world, I had to walk out of his office and into the world without any make up on. I looked in the mirror, took a deep breath and told myself, “It’s okay. It’s not how you look but who you are.”

And I spent the next few hours telling myself that as I went for lunch with my husband and then to the dentist and then home to look in the mirror and see these big, black, half-moon shapes under my eyes. I felt like I’d walked around with food on my face all day but when the time came to put on more concealer, I stopped myself. I can’t keep doing this; can’t keep covering myself up.

And yet, I feel like less of a person. I look at everyone around me, directly under their eyes and think, “Well, they look beautiful. Why do I look like I haven’t slept in weeks?”

Because when I look in the mirror I see one thing, my black circles. I don’t think I see myself as others see me. This obsession is proof that I only see the one thing that makes me feel ugly.

And so, I am left to wonder, what bigger issue are these black circles hiding? What would it really mean to go out in public without my make up? Am I so hideous that without my makeup I am unrecognizable? Am I Dr. Jekyll when I wear makeup and Mr. Hyde when I don’t? Because, honestly, I am still me. I am still the same person with or without my make up, aren’t I? Why have I given up so much of my energy to a genetic predisposition? To thin layers of skin? What power do they have?

But this weekend, it’s going to have to be. This weekend I cannot hide behind concealer and make up, and, well, clothes. This weekend I am going to have to get up there on that block and dive in and swim my hardest because that is who I am, metaphorically speaking. I am someone who dives off blocks without thinking what’s coming next, without checking the temperature of the water or the depth or asking how far I need to swim. I am all heart and no reason and willing to do it all when asked because I don’t want to miss out on life. And when it comes down to it, I think most people see that, at least those that matter. The only person who doesn’t see this, is me. And maybe, if I can’t look beyond the surface to see that side of me, maybe there is more that I can’t see. Such as, everything else reflected in the mirror.

Could it be that my friends are actually telling me the truth when they say they never noticed my black circles? Is it simply because they aren’t looking at them but at me? Could it be that I could do the same thing and they would simply disappear and I’d finally see the person in the mirror instead of one tiny flaw?

Maybe it’s time to stop hiding and come out from under those layers of concealer. Because I’m never going to see myself as I truly am if I keep covering myself up. So here I am, black circles and all. And you know what? Showing the world doesn’t change who I am a bit. 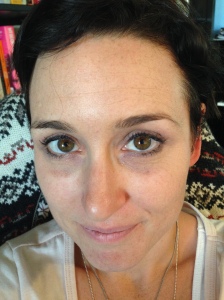 Categories: Accepting Oneself, Just Being Me, Life in General, The Road to Self Discovery

Tagged as: Beauty is more than skin deep, body image issues, Concealer and its limitations, It's what on the inside that counts, No Make Up, No More Hiding