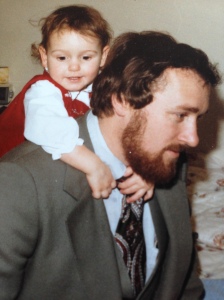 It’s my dad’s birthday today, his 65th. Or, it would have been were he here to celebrate it.

I say celebrate in a strictly physical, earthly sense, because I know he is out there. He’s just not walking and talking in a three-dimensional form like the rest of us warm-blooded human beings. He’s at that whole other level where things like breathing and bodies are just not necessary.

And so it’s hard to mark this day because I know he’s so far beyond it. Birthdays no longer matter when you no longer have a body to age. There are no more years to count for him because he is beyond that, he is in some other place where time is not of the essence. Time no longer affects him.

But it affects me.

I notice time. I notice the hours and the days and the weeks, months, years that he’s been gone. It seems to lag when I think of him, when I wallow in the lack of my father.

And yet, time also seems to speed up. I often forget how long it’s been since I saw him last. I still speak of him like he were here, laughing and joking and irritating me like it had happened yesterday. I’ll see or hear or want to tell him something and still pick up my phone to call him, forgetting he’s not at the other end of that phone number anymore. You’d think I’d remember that he’s gone by now. You’d think that the pain that sits heavy on my heart would have lessened by now.

And yet, sometimes, weirdly enough, I feel closer to him than ever. I talk to him more than I ever did because I seem to have an ongoing conversation with him all day long, even if it is a little one-sided.

But then there are times when it isn’t so very one-sided, as long as I choose to change my expectations on communication. For instance, if I am willing to accept thoughts as responses instead of spoken words. Thoughts that come into my head now and again that I know don’t belong to me. Often these thoughts are paired with an image of him smiling at me, nodding his head like he’s letting me know I got it right, I heard his message.

I know there are many people who would say I am making this up, that I can’t see or hear things that are not there, and yet, my father has set up a rather permanent spot right behind me. He’s not there all the time, but he is right now, and he is very often. And it’s a good feeling, not some weird, creepy, unearthly thing, but something very warm and loving.

Do you know that feeling you get when you are really excited? Like, you think about a person you love and your heart just wants to explode out of your chest? That feeling when you look at your sleeping kids, or your spouse has done something really sweet, or your friend has stepped up and really gone the extra mile for you. Or when you pull in your driveway and there is your dog practically convulsing because she is so happy to see you? I could go on for ever, but think of a baby smiling at you, that gummy, toothless, shining smile. How do you feel when that happens?

That is how I feel when my dad comes to stand beside me (although, standing is not the right word. It’s more like floating as he has no feet on which to stand). And it is such a wonderful feeling because it is freely given, with nothing attached; just pure, unadulterated love. Something he could not give me in life, or, he had tried but there were too many obstacles in the way from him really showing it and me really feeling it.

A few months ago I went to a conference and listened to Wayne Dyer speak, and I have to say, I was really disappointed. He spent a great deal of time discussing his father-in-law who had just died and how lucky he was to have moved on, that he was in such a better place than all the rest of us. He said that he was anxious to get there and what I got out of it was that life is some awful, stuffy, stinky train ride that is simply the vehicle to transport us to the warm, sunny, tropical holiday destination of death.

I have a hard time with that because I am living, right now, and pretty attached to my life and those who are in it. I am in no hurry to transition to some other place beyond this life. I want to enjoy it because this is what I have, NOW, and I don’t want it to be something to get through until I can die and move on to a better place.

And yet, I have felt my dad and he truly is somewhere better. I could feel all the pain and sorrow and burdens he carried in his life fall away to leave something else, something that I cannot put into words except to say that he is so much lighter, in a way, I would say that he is light.

I believe that expression, “take the weight of his chest,” (I know that is the wrong wording, feel free to revert back to my Huxley post which will then explain my quotation dyslexia) is more true than we could ever imagine. All the guilt, anger, jealousy, pettiness, and so forth, that we carry around is truly a heavy burden weighing us down. It nearly crushed my father. And yet, now it has all fallen away and he has been able to leave it all behind because that petty human stuff no longer matters when you’re no longer human. And lucky for me, any guilt and pain I had associated with our interactions in life also went with it, because how could I feel guilty for something that no longer matters?

That is the better place they speak of. It’s not some heaven in the clouds with angels playing harps and all the ice cream you could eat without getting fat, it’s a place free of all the shit we put on ourselves. It’s a place where we can finally see that we are all beautiful and amazing and can tread lightly because the negative stuff in our lives is no longer holding us down, because we are no longer dragging ourselves down. It’s a place where we can finally be who we truly are, where that voice in our head that tells us we’re not good enough, not skinny enough, not kind enough, (insert your issues here,) or anything else we tell ourselves, is silenced.

And that is why I don’t want to wait until I die to get to that place. I have felt that lightness every time my dad has come to visit me, sometimes in a sensation on my shoulder, a voice in my head, or simply a warm feeling when I remember him. He has shown me what life can be like now, if I let the shell of all my inadequacies fall away. And in those moments throughout my day, when I am quiet enough to notice them, I can recognize it for what it is; heaven. But not the heaven I learned about in Sunday School for only those selected few. It is the heaven that is in all of us. It’s simply me, before I let myself or others/society make me forget who I really am.

So, instead of dwelling on the fact that my father is not here for another birthday, I’d like to thank him for all that he has given me in his passing. I’d like to thank him for showing me a world that is so much bigger than the vacuum I lived in. One that is lighter and brighter and so much more hopeful than anyone could have told me, because there is no way to explain it. If I had to think of the closest word to describe it, I’d have to say it’s love, but in its purest form. In a form he could have only shared with me in death because all the human stuff was blocking both of us from seeing it for what it truly is. I am not going to be sad today, nor am I going to miss him, because I’m going to hold onto that feeling he has blessed me with and know I’m the one receiving the birthday gift today. And if I was going to give him anything for his now un-birthday, it would be a promise to hold onto what he’s given me and to do my best to share it with everyone, to do for my loved ones in life what he did for me in death.